Little Mix has won me over again with “Move“. I can’t deny them any longer. When they released “Wings” it was a guilty pleasure, but now I just have to admit it. I’m addicted to the catchy tunes. Granted, I was a huge Spice Girl fan back in the day, but since then girl pop-groups (I don’t include Destiny’s Child) haven’t really taken over the market. I thought The Saturdays were pretty cool, but they didn’t do as great in the US as I thought they would. Little Mix, however, I think has the potential to do really well here especially after Fifth Harmony has been causing a stir. Both groups are X-Factor alums (UK and US, respectfully) and it’s clear Simon Cowell knows what to do with girl groups.

Like “Wings”, “Move” has strong vocals and dance feels galore. Watch the video above and see if it doesn’t get you dancing—even just a little.

UK 2010 X-Factor winner, Matt Cardle has done quite well for himself if a platinum-selling debut album is any indication. His latest single, “Loving You” features none other than my favorite Spice Girl, Melanie C. He also co-produced the single with Jamie Scott and Toby Smith (ex-Jamiroquai) and  plays guitar and drums on the track. Talk about being hands on.

Sporty Spice has an awesome voice and I enjoyed her duet with Bryan Adams. This time around the duet with Matt is just as UH-mazing. The song is great and the two have great on-screen chemistry. Take a look above!

We caught up with the lovely Carly Rose Sonenclar who was the runner-up on the second season of X-Factor USA. Carly told us about meeting her idol, Bruno Mars, what she would do with Channing Tatum if she were able to kidnap him for a day and the  story behind her new original song, “Unforgettable“.*

We are also doing an autograph giveaway. If you want to win an interview question card signed by Carly Rose then head over here for the contest details. 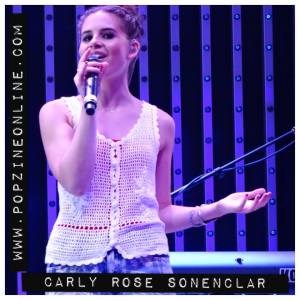 Want to win an interview card autographed by X-Factor Season 2 Runner-Up, Carly Rose Sonenclar? All you have to do is like her Facebook page here, our Facebook page here and leave a comment on the giveaway post here and you’ll automatically be entered into the random drawing.

This is open to all fans worldwide, so be sure to pass it along to everyone. The winner will be announced on August 1st, 2013 on Facebook. 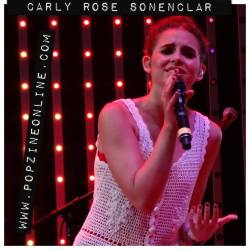 Heather Russell, who is only twelve years old, opened the show. She is a singer/songwriter from Toronto. She co-wrote the song, “Crazy Glue” that was featured on the album of former American Idol contestant Jessica Sanchez. Heather made headlines when she was discovered at the age of ten on YouTube belting out tunes sounding at least twice her age. She has Ashton Kutcher and Ellen as fans. But at this show she was relatively unknown, but that didn’t stop her from coming out on stage full of confidence. Her set was comprised entirely of originals which was impressive on its own. The audience enjoyed her songs, but it was her innocent demeanor and the way she introduced each song that made everyone smile.

If you know who Carly Rose Sonenclar is then END_OF_DOCUMENT_TOKEN_TO_BE_REPLACED 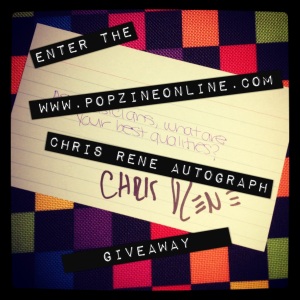 We’ve had the pleasure to interview Chris Rene in the past and before we let him go, we got him to sign a few interview cards. The one we are giving away this contest is pictured above. The rules to enter the giveaway are simple.

That’s it! AND…if you want to get more entries all you have to do is have your friends do steps 1-3 and when they are on step 3 to also include that you sent them. Open to all fans worldwide. Winner will be chosen at random and announced on March 4th, 2013. Make sure to do all the steps otherwise you may be disqualified! 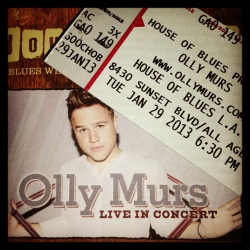 Olly Murs has been on my wish list of concerts to see for awhile now. He’s been going back and forth from the UK to the US for promotional work, but hasn’t had any official gigs until now. END_OF_DOCUMENT_TOKEN_TO_BE_REPLACED

Olly Murs is making the U.S. crossover with his catchy song, “Troublemaker” featuring Flo Rida. I posted his video for “Heart Skips A Beat” awhile back and since then I’ve been a fan. He was the runner-up on the sixth season of X-Factor UK. Since then he’s been sharing his time lately between the U.S. and the UK for promotion.

This video was released a couple of months ago and is a fun flirty tune. His voice channels a certain famous frontman and you’ll know who I mean when you hear it. Yet, it is still distinct enough to be an Olly original sound. He’s wearing his trusty suspenders and even Flo Rida’s appearance on the track gives it a good boost.

Olly has blown up in the UK, so if you’re in NY, Chicago or LA, you’re in luck. He’s playing a show in each of those cities this month, so catch him while you can.

Posted by popzineonline on 08/03/2012
Posted in: music news, news. Tagged: chris rene, xfactor. Leave a comment
With a recent performance on Ellen, over 4 million views on Vevo, 200,000 singles sold and the success of his first Top 40 Radio hit with “Young Homie,” Chris Rene has arrived on the pop music scene and has released his new single “Trouble.”
Simon Cowell championed Chris as his “Favorite Contestant on X Factor from Season 1.”
His forthcoming CD release is slated for September 18 on Epic Records.

Olly Murs and Rizzle Kicks collaborating is just pure genius. Olly Murs, runner up in Season 6 of X-Factor UK is finally making his way to North America. English hip-hop duo, Rizzle Kicks have also been making their name known in the states, most recently having “Down With The Trumpets” featured on MTV’s hit series, Teen Wolf. The musicians came together for “Heart Skips A Beat” which they performed live at the 2012 BRIT Awards. This is such an amazingly catchy song that deserves a ton of US airplay. However, the US version of the single replaces Rizzle Kicks with Chiddy Bang. Big mistake if you ask me. You can find the new version somewhere on YouTube.  Luckily, you can watch the original above and keep hitting repeat. [EDIT: The official video with Rizzle Kicks is no longer available (this is a tragedy), but you can still listen to the song above.]