Nick Jonas just released his music video for his song, “Chains” and damn are we happy. Chains is reminiscent of the sound that we would have gotten from the Jonas Brothers fifth album, V, that was never released. In particular, the song “What Do I Mean To You“. This is the type of sound to get you to stand out as a solo artist, so congrats to Nick. The video also has an understated edginess to it. Check it out above.

Maroon 5 announced they will be releasing their highly anticipated fifth studio album, titled  V. The album will drop on September 2, 2014 on Interscope Records, who they recently signed with. The first single will be released in the summer. The band has also signed a worldwide tour deal with Live Nation with tour dates coming soon.

The guys recorded the album in LA the past year and it features some amazing producers including: Max Martin (Yay!), Benny Blanco, Ryan Tedder (Yay, again!), Shellback and Sam Martin. Long-time keyboardist Jesse Carmichael is also back after having taken a hiatus while the band recorded 2012’s Overexposed. 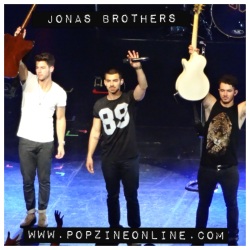 I’ll admit I’ve never heard an entire Jonas Brothers record. Gasp! I know. In fact, the only songs I had heard before were from Camp Rock 1 and 2 (guilty pleasures) and very recently, “Pom Poms” when they performed it on Jimmy Fallon. Don’t ask me why it’s taken this long because I have absolutely no clue, but I am glad that I finally got around to checking out one of their shows. END_OF_DOCUMENT_TOKEN_TO_BE_REPLACED

This year was my first attending San Diego Comic-Con and it was a phenomenal experience. I won’t lie; I’ve been dying to go for years, but had a difficult time finding anyone who would admit to having an inner geek. So I read up online for tips and talked to a few veterans about what I could expect. For the most part everything I learned prior to going was dead on. I stayed with a friend, who is a local, which definitely had its perks. END_OF_DOCUMENT_TOKEN_TO_BE_REPLACED

UPDATE: OFFICIAL PROGRAMMING IS NOW AVAILABLE AT THE COMIC CON WEBSITE. Be sure to take advantage of the schedule calendar.

It’s almost that time where geeks start freaking out over what panels will be present at Comic Con. If that’s you, get your schedules ready. The shows/movies below are the preliminary panel line up for SDCC 2010. We will be adding more once they are confirmed.

Tron Legacy: (Thursday, July 22nd 11:15 / Hall H) On the dais will be filmmakers and talent from the film, including director Joe Kosinski, producers Sean Bailey and Steven Lisberger as wells as cast members Jeff Bridges, Garrett Hedlund, Olivia Wilde, Michael Sheen and Bruce Boxleitner. The panel discussion, to be moderated by Patton Oswalt, is set to include exclusive glimpses of the film, as well as a Q & A involving all panel participants, along with special surprise guests.

Drive Angry 3D: (Friday, July 23rd 10:30-11:00 / Hall H) In a Comic-Con exclusive, stars of the film including Nicolas Cage and Amber Heard as well as director Patrick Lussier will debut footage from the high-octane, blood-spattered road trip through hell. In this newest action horror shot in 3D, a vengeful father hunts down the people who brutally killed his daughter and kidnapped her baby.

Bobs Burgers: (Friday, July 23rd 11:00-12:00 /Room 25ABC) Creator/Executive Producer Loren Bouchard (Home Movies) and Jim Dauterive (King of the Hill) will be on hand to introduce animation fans to their hilarious new series premiering on Fox in January 2011. There will be a screening of never-before-seen footage followed by a Q&A.

Bones: (Friday, July 23rd 2:00-2:245 /Ballroom 20) Creator and Executive Producer Hart Hanson and Star David Boreanaz— Hart Hanson and David Boreanaz will be on hand to discuss what went down in season 5 of Bones and the cliffhanger finale as well as what’s in store for Booth and Brennan in an exciting season 6!

Terra Nova: (Friday, July 23rd 3:30-4:30 /Room 6A) Executive Producers Brannon Braga (24, Star Trek: Enterprise), David Fury (24, Lost) and Director Alex Graves will reveal a glimpse into the most highly anticipated epic family adventure 85 million years in the making. This new event drama slated for midseason on FOX comes from the brilliant minds of Steven Spielberg (Jurassic Park, The Pacific) and former News Corporation President and C.O.O. Peter Chernin and follows an ordinary family on an extraordinary journey back in time to prehistoric Earth as a part of a massive expedition to save the human race.

The Simpsons: (Saturday, July 24th 1:30-2:15) Now entering its record-annihilating 22nd season on Fox, The Simpsons has won 25 Emmy awards, been the subject of a smash feature film in 2007, inspired an awesome ride at Universal Studios and Homer Simpson was just named the greatest television character of the last 20 years by Entertainment Weekly.  Get an insight into the daily doings of this series from Creator Matt Groening, Showrunner Al Jean, Executive Producer Matt Selman and Supervising Director Mike Anderson.

Glee: (Sunday, July 25th 1:30-2:30 /Ballroom 20) One year after the cast and creators of Glee came to Comic-con for the first time, the show has exploded with blockbuster ratings, number one albums and a sold-out concert tour. Get an exclusive first look at what’s in store for season 2 from executive producers Ryan Murphy and Brad Falchuk along with stars Chris Colfer, Amber Riley, Jenna Ushkowitz, Kevin McHale, Mark Salling, Heather Morris and Naya Rivera, as they share some never-before-seen footage, spill behind-the-scenes secrets and take questions from the crowd.

Nikita: (Saturday, July 24th 5:15 -6:15 / Room 6BCF) Come catch a sneak peek screening of this action-packed thriller, and join Maggie, series stars Shane West (ER) and Lyndsy Fonseca (Kick-Ass), and executive producer Craig Silverstein (Bones) for an inside look at one of the most anticipated new shows of the fall season.

Supernatural: (Sunday, July 25th 11:15-12:15 / Ballroom 20) Join Supernatural cast members to be announced, executive producers Sera Gamble (Eyes) and Ben Edlund (Angel), and creator/executive producer Eric Kripke (Boogeyman) for an exclusive sneak peek at footage from the highly anticipated sixth season of this thrill-ride series. The panel will answer questions from the audience and also show a portion of the special features from the upcoming Supernatural: The Complete Fifth Season DVD and Blu-ray™ release.

In addition to the H50 panel – where fans will have an opportunity to win three cast signed collector’s surfboards — there will be autograph signings by the cast and producers at the CBS Booth (# 4129), exclusive giveaways and a chance to win a vacation getaway to the filming location of H50 on the tropical and vibrant island of Oahu.

Mythbusters: (Saturday, July 24th 7:15-8:15 /Room6BCF) his year, all five MythBusters will be in attendance — the first time they’ve all attended a ‘con together (Kari was on maternity leave last year). The panel  will feature world premiere sneak peeks of upcoming myths and behind the scenes info about the Emmy-nominated show the New York Times called “the best science program on television.”

Being Human: (Friday, July 23rd 6:00-7:00 pm/ Room 6A) Creator/writer Toby Whithouse with cast members Russell Tovey, Lenora Crichlow, Aidan Turner and Sinead Keenan are on stage for a fan Q&A and exclusive inside peek to the new U.S. premiere season launching the same weekend as Comic-Con.  (2:00–3:00pm Being Human signing at the BBC AMERICA booth (#3629) and Thursday, July 22nd 8:00–11:00pm BBC AMERICA U.S. Premiere Screenings of Doctor Who and Being Human / Room 6DE).

Look Around You: (Thursday, July 22nd 5:00-6:00pm / Room 6A) As their BAFTA-nominated show comes to BBC DVD, creators-stars Robert Popper (Peep Show, Hot Fuzz) and Peter Serafinowicz (Couples Retreat, Shaun of the Dead), are on stage to take questions from the fans. (2:30-3:30pm: Look Around You signing at the BBC AMERICA booth (#3629))

Batman: The Brave and the Bold: (Friday, July 23rd 10:30-11:30 / Room 6A) The Caped Crusader swings back into San Diego as Batman: The Brave and the Bold returns to Comic-Con for its third consecutive year with an advance screening of an upcoming episode, as well as a lively discussion with voice of Batman Diedrich Bader (Surf’s Up), executive producer Sam Register (Teen Titans), producers James Tucker (Justice League Unlimited) and Michael Jelenic (The Batman), and voice director Andrea Romano (Superman Doomsday). As a special bonus for fans, the panel will also screen the world-premiere trailer for the upcoming and highly anticipated Cartoon Network/Warner Bros. Animation series Young Justice.

Children’s Hospital: (Thursday, July 22nd 5:00-6:00 / Room 25ABC ) Check out the Childrens Hospital panel and hear from the show’s creative team led by Rob Corddry (Hot Tub Time Machine, The Daily Show with Jon Stewart) and Jon Stern (producer of The Ten and Scotland, PA). They will be joined by members of their ensemble cast of comedic heavyweights, including Lake Bell (How to Make It in America, It’s Complicated), Erinn Hayes (Parenthood, Worst Week) and Rob Huebel (I Love You Man, Human Giant). Childrens Hospital explores the emotional struggles and sexual politics of a group of doctors charged with healthy libidos. Their dedication to their personal lives is relentless, interrupted only by the occasional need to treat sick children.

Unnatural History: (Sunday, July 25th 1:00-2:00 / Room 6BCF)Fans will be treated to a premiere screening of a never-before-seen episode, as well as a Q&A with series stars Kevin G. Schmidt (Alvin and the Chipmunks: The Squeakquel), Jordan Gavaris (Degrassi: The Next Generation), Italia Ricci (Greek) and Martin Donovan (Weeds) as well as creator/executive producer Mike Werb (The Mask, Face/Off).