Nathan Sykes, formerly of the British boyband The Wanted, has been planning a solo career for some time now. His first single is set to be released this Spring; however, he decided to give us a sneak peek by releasing a track, “More Than You’ll Ever Know,” from his forthcoming album. He says:

I wanted to give you a taster of what’s to come and couldn’t wait until the first single. So here’s “More Than You’ll Ever Know”, a track from my forthcoming album. I hope you love it as much as I do.
#MTYEK

Love it, we do! We are so happy that he decided to stick with soulful genre that fits him so well. You can listen to the song above and download it by signing up here.

Wow, I’m a huge fan of Conor Maynard and I am pleasantly surprised with the direction of his new single, “R U Crazy”. The beginning gives me JT vibes (in his current 20/20 Experience style), but then busts into this hip-hop dance vibe that’s completely different than what you would expect all the while being awesome. Girls had their break-up anthem with Taylor Swift’s “We Are Never Ever Getting Back Together” and Conor’s “R U Crazy” strikes me as the guy version. Of course, us girls can still relate to this one and we’ll be dancing our way through it. I love it and you probably will to. Take a look above!

Little Boots made headlines with her Gold-selling debut Hands in 2009. Now she is prepping to release her sophomore studio album, Nocturnes on May 7th, on her new On Repeat Records imprint through Kobalt Music. Produced by Tim Goldsworthy, Nocturnes contains a mix of sounds including: pop, disco and EDM. She has posted some track teasers on her website for now, but if you’re getting antsy you can pre-order Nocturnes on iTunes HERE.

Little Boots will also be doing a national US tour in support of the album this May. Check out the dates below.

English singer, Conor Maynard will be doing his first U.S. Tour this month to the locations chosen by fans through his MayniacMap challenge. He will be visiting five (5) cities in five (5) days. He will be meeting fans and signing albums after each show with those who purchased his album, Contrast. You can pre-order your copy on iTunes here. Check out the dates below.

We got to chat with new UK artist, Jake Bugg. He released his self-titled album on Mercury Records and it has since gone #1 on the UK charts. He has toured with Noel Gallagher’s High Flying Birds and Snow Patrol. His music can be described as indie rock mixed with folk. Check out his fifth single, “Two Fingers” which is out now. Next up, Jake will release his record here in the states. Keep your ears out for it. 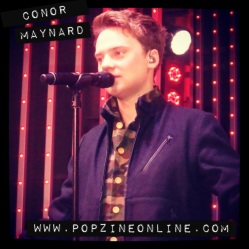 Blake Michael, from the Disney movie Lemonade Mouth and the band of the same name, was spinning under the moniker DJ Blaze. I can’t say that I was impressed with his set since he must have played a few songs at least twice. Let’s be real, if you have to play “Gangnam Style” more than once just to get the crowd moving then you need to change something. He was followed by Megan Nicole who is known from her YouTube videos. She was doing the best she could, but her sore throat caused her to end her show way earlier than scheduled. So lucky us, we got to hear Mr. Variety, DJ Blaze again.

Everyone was starting to get restless while waiting for Conor to come onstage. Conor Maynard is the newest UK artist to come to the U.S. He was a YouTube sensation who was discovered by Ne-Yo, who then took him under his wing. Three of his singles have reached the Top 10 on the UK Charts and his album debuted at #1. Many like to compare him to Justin Bieber because they are both young, got their start on YouTube and are both mentored by international superstars, but that’s where the comparison ends. Conor’s style is all his own and listening to a single song from him can tell you that. END_OF_DOCUMENT_TOKEN_TO_BE_REPLACED