Posted by popzineonline on 02/01/2013
Posted in: interviews, music news, news. Tagged: Andy Brown, andy pitts, autograph, british, british invasion, chapman square, contest, england, english, giveaway, interview, Joel Peat, lawson, learn to love again, london, rock music, Ryan Fletcher, standing in the dark, uk band. 2 Comments
We recently got to sit down and chat with UK band, Lawson. Andy, Adam, Joel, and Ryan tell us who they would kidnap for a day, advice they got, but didn’t take from Jessie J, what their signature pose would be if they were a statue and more. We’re also giving away an interview card autographed from the band. For more details on that visit this page. 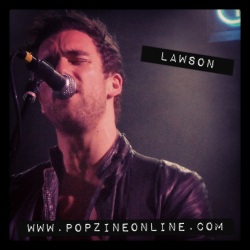 After patiently waiting for months and months and then some more months, Lawson finally announced a few North American tour dates at the end of 2012. It should come as no surprise seeing as how we are having another “British Invasion” in the states and fan girls are jumping in on the frenzy in droves. Don’t believe me? Well, even though most people in America have no idea who Lawson is they still managed to sell out their two dates here. You know, the dates in LA and NYC. Pretty impressive. END_OF_DOCUMENT_TOKEN_TO_BE_REPLACED