Sean Lennon and Charlotte Kemp Muhl, the duo behind The Ghost of a Saber Tooth Tiger (The GOASTT), released their new album today. Midnight Sun contains 12-tracks and is available on iTunes now via Chimera Music. The entire project screams creativity from the music to the artwork. They have an experimental rock vibe going on and I dig it. Download it from iTunes or get the vinyl from their official website.

EVENT REVIEW: The Night That Changed America: A Grammy Salute to The Beatles 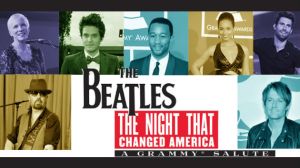 The Beatles made their US debut on the Ed Sullivan show 50 years ago this February 9th, the same day this special will air. That appearance has become one of the most iconic in music history. Many have tried to replicate it, but it is impossible. Being a HUGE Beatles fan, this was one concert I was dying to see. Paul AND Ringo, TOGETHER—and not like the Grammys. Instead, they would be performing classic Beatles hits. Can we say, EPIC? END_OF_DOCUMENT_TOKEN_TO_BE_REPLACED