MUSIC VIDEO: KONGOS – “Take It From Me”

KONGOS are back with a new single, “Take It From Me” from their new album, Egomaniac. They sure seem like they mean business with this track. It’s aggressive, full of energy and has their signature accordion playing a prominent role. The video features the band with inflated heads representing egos that can grow uncontrollably. Nice follow-up guys!

My new favorite band this year is South African alternative rockers, KONGOS. These four brothers hit the music scene with their hit song, “Come With Me Now” from their album, Lunatic, and since then I have been hooked.

The band said that the last time they played in L.A. there were maybe twenty people in the room and it was most likely the other bands and their crew. They were psyched that this was a sold out show and from what I could tell it seemed over-packed.

They jumped into the song, “Hey I Don’t Know” and kept jamming the night away. With the exception of “As We Are” and “Traveling On” they played Lunatic in its entirety. They threw in a few covers including two songs from The Beatles and one from their father, John Kongos. Any band that covers The Beatles and does it well can count me as a fan.

One of the coolest parts about the show was how most of the audience did not have a camera or phone out shooting the band. There were a few keepsake snaps, but other than that everyone was completely captivated by the band. I really enjoyed seeing that. They played off each other so well (like brothers would) and it was so easy to ignore everyone else in the room, but them. These guys were fantastic live and to prove my point I will be seeing them again when they open for King of Leon in October. 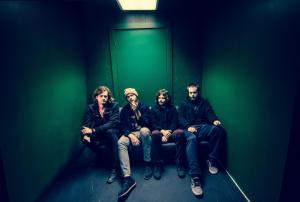 We posted the music video for “Come With Me Now” from KONGOS back in May and things have taken off for the group. Starting on July 31st, the band will embark on King of Leon‘s Mechanical Bull Tour. After that, the band will join OneRepublic in the fall on their European Tour.

Check out the dates below for the Mechanical Bull Tour (others can be found on their official website) and catch these guys while you can.

END_OF_DOCUMENT_TOKEN_TO_BE_REPLACED

If you have not heard “Come With Me Now” by the super cool band, Kongos then you are missing out on some extremely awesome new music. Sometimes you just know when a band has the potential to be the next hit band and sirens went off for me with these guys. They are four brothers who are from South Africa, but also grew up in London and now live in Arizona. They bring an eclectic sound to alternative music that has been missing (who doesn’t love an accordion?!).

They released their debut album, Lunatic in 2012 in other parts of the world, but it wasn’t until this year when they began receiving major recognition and re-released Lunatic through Epic Records. The album is available through iTunes and they, along with Young the Giant, will be joining Kings of Leon on their upcoming tour.