I loved everything about this and not just because I live in LA. From the great group of people featured to how beautifully they captured the cityscape of Los Angeles, all the while weaving in their song, “City of Angels”,  everything represented the city perfectly. I hope they consider making more of these and Jared should really continue directing. Whether you’re a fan of L.A. or not, this is a cool video to watch. 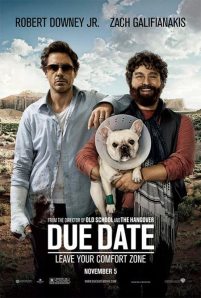 I went to the premiere of Due Date at Grauman’s Chinese Theatre in Hollywood on October 28th. I had seen some promotional material for the film, but not enough to expect what was coming.

The movie starts off with Peter Highman (Robert Downey, Jr.) who is on his way back to L.A. to see his wife (Michelle Monaghan) give birth to their child via C-section. However, a run-in with Ethan Tremblay (Zach Galifianakis), an aspiring actor, at the airport turns his journey into a nearly impossible one. Peter manages to get put on a no fly list, is left without his wallet and with no ID or money is stuck at the mercy of Ethan. Ethan is more than overjoyed to have Peter join him on his way to Hollywood as he is going through a rough time after his father passed. In fact, Ethan not only has his bulldog with him, but also his dad’s ashes in a coffee tin. Yes, anything ridiculous that could happen to them does. Jamie Foxx plays Darryl, Peter’s best friend and Juliette Lewis plays a “Pharmacist” and I use that term loosely if you know what I mean. Keep your eyes peeled for appearances by Charlie Sheen and Jon Cryer as their Two and a Half Men characters, RZA (from Wu-Tang Clan) as an airport screener as well as a special something for all you Seinfeld fans.

With Downey, Jr. and Galifianakis teaming up together you know you can do no wrong in the laugh department. You will get the “I can’t believe that just happened” laughs, great one-liners, “WTF is he doing!??” and of course some totally gross out moments. Some thought it was better than The Hangover, but while I thought Due Date was entertaining enough it did not, in my opinion, surpass the hilarity of The Hangover. Foxx is severely underused. I wonder why even have him in the film for such a small and insignificant part. Though Lewis had a small role as well, she shined in it.

Due Date is a perfect movie to see if you are looking to watch a comedy, but it is certainly not for the kids. It will also probably be even funnier if you have a few drinks beforehand, but this is not completely necessary.

Afterwards, I ran into Ken Jeong (Asian guy from The Hangover) who was taking pictures with fans before rushing off. While waiting outside, I turned to find Zach Galifianakis walking towards where I was standing and after asking he was nice enough to sign my ticket. I later found myself face to face with Robert Downey, Jr. and let’s just say my nice experience did not cross over with him.