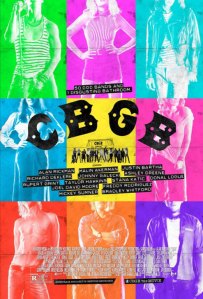 If you thought that the movie CBGB was about the iconic New York club that Hilly Kristal opened back in 1973, you would be correct. The film stars an incredible cast including the phenomenal Alan Rickman as Hilly Kristal.

Kristal is shown as having difficulty maintaining a business and having to file for bankruptcy multiple times. After securing a loan from his mother, Bertha (Estelle Harris), he opens a club on the Bowery that will play Country, Bluegrass and Blues (CBGB) music. Clearly, things didn’t go as planned and instead CBGB’s became the place where underground rock and punk acts began playing before reaching super-stardom. Hilly saw something in each of the bands that he booked and his only stipulation was that they were not allowed to play any cover songs, only originals. Some of the acts that played there and that are shown in the film are: The Police, Dead Boys, The Ramones, Talking Heads, Television and Blondie. Due to the popularity of these acts, Hilly Kristal was deemed the Godfather of Punk. END_OF_DOCUMENT_TOKEN_TO_BE_REPLACED