Ed Sheeran‘s newest video for the single, “Thinking Out Loud” is quite the surprise! Who knew he had it in him to dance the night away like that.  Ed reportedly had professional dancers come in to train him just so he could get the routine down perfect. The hard work sure paid off! Beautiful song (not surprising), but I just can’t take my eyes off him in this video. Check it out above!

Ed Sheeran as a puppet you say?! That’s exactly what you will see in his new music video for the amazingly awesome single, “SING“. I just can’t get enough of this song and he just made it better with this super clever and funny video. The karaoke bar theme fits really well with the song lyrics and those Asian businessman were incredible. Pharrell also makes a cameo in the video since he contributed vocals and produced the track. The ending of the music video is classic. It is hands down one of my favorite videos this year. Watch the goodness above!

EVENT REVIEW: The Night That Changed America: A Grammy Salute to The Beatles

The Beatles made their US debut on the Ed Sullivan show 50 years ago this February 9th, the same day this special will air. That appearance has become one of the most iconic in music history. Many have tried to replicate it, but it is impossible. Being a HUGE Beatles fan, this was one concert I was dying to see. Paul AND Ringo, TOGETHER—and not like the Grammys. Instead, they would be performing classic Beatles hits. Can we say, EPIC? END_OF_DOCUMENT_TOKEN_TO_BE_REPLACED 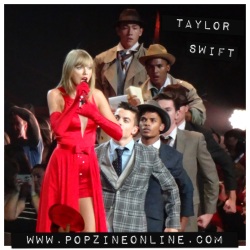 This review is going to be a little different from the ones I usually write mostly because I got a special opportunity and decided to write about it along with the show review. I was able to be a part of the Grammy U: Sound Checks with Taylor Swift event. Twenty of us got to watch Taylor do her sound check, participate in a Q & A, and watch her do a press conference and a few press interviews. I didn’t know what to expect, but I left very impressed with her. END_OF_DOCUMENT_TOKEN_TO_BE_REPLACED 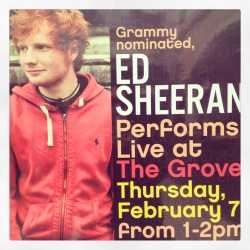 Ed Sheeran, Grammy nominated artist and the newest of the British Invasion, graced Los Angeles with multiple shows this month. One of which was a free show at The Grove. Since it was a school day I figured it probably wouldn’t be as chaotic as it usually is, but I was wrong. I arrived at The Grove a good hour before the start time and saw the stage area fairly empty and thought this should be easy to catch. That was before we were told that the line for the show started outside on a side street and once I found that side-street I saw a line that went on and on and on. Of course the line would be ridiculous. It’s Ed Sheeran we’re talking about here. Silly me. END_OF_DOCUMENT_TOKEN_TO_BE_REPLACED