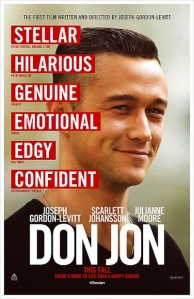 Don Jon was written and directed by the amazingly awesome, Joseph Gordon-Levitt. He also portrays the main character in the film that also stars Scarlett Johansson, Julianne Moore, and Tony Danza.

The story revolves around Jon Martello (Gordon-Levitt), known as Don Jon to his friends because he manages to always pick up perfect “10s” every weekend at the club. He only cares about his body, his pad, his ride, family, church, his boys, his girls and porn. However, despite his many hookups none of them leave him as satisfied as he is when he watches pornography on his computer. In an attempt to find something more meaningful he begins a relationship with Barbara Sugarman (Johansson) to the delight of his mother and father (Danza). However, things aren’t as great as he thought they would be and he finds an unlikely friend in one of his classmates, Esther (Moore). To top it off he comes from a Catholic family living in New Jersey. Yeah, that sets up a really vivid and interesting stage. END_OF_DOCUMENT_TOKEN_TO_BE_REPLACED

Since this is a JGL project I know it’s not going to be entirely predictable. It will most likely have the perfect combination of seriousness and comedy and incredible acting. So you bet I’ll be checking it out in theaters, September 27th. Watch the trailer above and mark your calendars!