TRAILER: THE BEATLES: EIGHT DAYS A WEEK – The Touring Years

Calling all fans of the Beatles!!! Ron Howard has created an authorized and, most definitely, highly anticipated documentary feature film about The Beatles called The Beatles: Eight Days A Week – The Touring Years. It features rare and exclusive footage with the full cooperation of Paul McCartney, Ringo Starr, Yoko Ono Lennon and Olivia Harrison.

Check out the first trailer above for your first sneak peek.  Hulu will also exclusively stream the film to Hulu subscribers on September 17th and the US theatrical release is set for September 16th, 2016.

“We are going to be able to take the Super 8 footage that we found, that was all shot silent. We’ll not only be able to digitally repair a lot of that, but we’ve also been finding the original recordings. We can now sync it up and create a concert experience so immersive and so engaging, I believe you’re going to actually feel like you’re somewhere in the Sixties, seeing what it was like to be there, feeling it and hearing it. And as a film director, that’s a fantastic challenge.” -Ron Howard

You probably saw the headlines all over social media about “Batkid” back in 2013. Five-year-old cancer patient, Miles Scott wanted to be a superhero for his wish from the Make A Wish Foundation and San Francisco was turned into Gotham City. What you may not have known is that they filmed the making of the extravaganza for a documentary. Now what made this story famous was how thousands of people came together to contribute to this special day. However, there is some controversy since many feel that Batkid was merely being expoitated and that thousands of other children who are ill have never gotten this kind of treatment.

Batkid Begins focuses on why this particular story became such a phenomenon. The trailer shows how strangers can make a difference in one child’s life and maybe after watching this others will be inspired to help the thousands of other sick children in the world who need an uplifting moment in their life.

If that doesn’t convince you, Batkid Begins was made using funds raised through indie-go-go and as stated on the funding page, “The proceeds of the film will go to the Batkid Fund, which will support San Francisco charities.”

MOVIE REVIEW: Backstreet Boys – Show ‘Em What You’re Made Of

The Backstreet Boys had the premiere of their documentary, Show ‘Em What You’re Made Of in Los Angeles. They offered up tickets to their fans for $40 presumably because they were going to be there and they said that there would be “lots of other surprises.” The second part of this review is going to talk about my disappointment with that statement, but first the documentary itself.

I have been a huge Backstreet Boy fan for years. As an American fan I was still getting their European releases shipped to me, so I could enjoy all the music we were not getting here in the state. I had my room wallpapered with their faces and bought every magazine I could find with them in it. I have seen them multiples times in concert and have even had the opportunity to meet them a few times. So needless to say, I was excited for this documentary.

The film started off great with introducing who each Backstreet Boy was and how the group first started out. I really enjoyed how they discussed the drama with their former manager, Lou Pearlman. It was cool to see each of their perspectives on the matter and it looked like it was almost therapeutic for them. The best part was how they each did a hometown visit and we got to see where they came from and someone who influenced them. Even after all this time there is still new things a Backstreet fan can learn. END_OF_DOCUMENT_TOKEN_TO_BE_REPLACED

A new Beatles documentary is in the works! Authorized by Apple Records and with full cooperation from Paul McCartney, Ringo Starr, Yoko Ono Lennon, Olivia Harrison the doc will feature the band’s touring years. Ron Howard will direct:

I am excited and honored to be working with Apple and the White Horse team on this astounding story of these four young men who stormed the world in 1964. Their impact on popular culture and the human experience cannot be exaggerated.

If you have Beatles footage or memorabilia from that time you may submit it for use in the film here.

Green Day took their album American Idiot to Broadway with a musical of the same name and it has garnered rave reviews since. Now the band has released a documentary based on the process of bringing their songs to the stage called Broadway Idiot. It played at SXSW Film Festival and BFI London Film Festival this year and  is now available on iTunes and Video on Demand. Check your local theaters to see if it is playing near you. In the meantime, catch the trailer above!

If you are a Beatles fan, like myself, then you’re definitely going to want to check out this new documentary. Good Ol’ Freda is the story of Freda Kelly who was the secretary of The Beatles from the beginning to the end!

She dishes all about her employers and friends in this film that premiered earlier this year at SXSW. Well, maybe not all…in the trailer she “passes” when asked if she dated any of them. Interesting! Take a look above!

MxPx will release a music documentary entitled Both Ends Burning, featuring footage from the band’s 2008 world tour all the way to the band’s sold-out Seattle show in March 2011. In this brutally honest depiction of the band, MxPx finds themselves at a crossroads in their career, struggling to find the balance between full time jobs, and the life of a touring musician. Special guests included on the DVD: Ethan Luck (Relient K), Stephen Egerton (Descendants), Jeremy McKinnon (A Day To Remember), Chris Demakes (Less Than Jake). Directed by Bryan Buchelt of Snaproll Studios, the DVD will be available digitally on December 1 through most online retail outlets and the band’s website (www.mxpx.com). The physical version, which includes over 20 minutes of deleted scenes, will be available December 8 through the band’s website. Pre-order packages are available now. 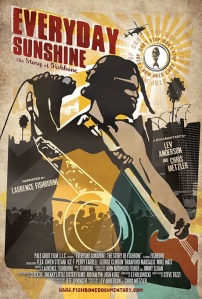 Everyday Sunshine is the story of Fishbone, a band that pioneered funk rock in the African-American sector and influenced bands such as No Doubt, Sublime and The Red Hot Chili Peppers. Fishbone, which began with Norwood Fisher, Angelo Moore, Chris Dowd, Phillip Fisher, Kendall Jones and Walter A. Kibby II, came together in California during the punk rock scene. They were signed to Columbia Records upon graduating high school and went on to tour all over the world for the past 25 years.

The first 30 minutes have you captured in what you think is going to be an interesting look inside of Fishbone, but then you are dragged into their drama which brings the audience down like it did the band. The documentary never explains why the band never blew up, but it doesn’t have to. Watching what went on in their lives and the attitudes of each member, I’m not surprised. This band has had so many ups and downs and crazy characters it’s a wonder they are still intact (albeit with lineup changes along the way). Just watching their story unfold had me wanting to leave the band. There’s no denying that Fishbone is talented and their outrageous stage antics keep the fans coming, but it takes more than that to become successful.

Primarily focusing on the conflicts the band went through took away from what the band has accomplished. I wish the angle of the film would have highlighted their talents more than the struggles they had with each other. They have now put aside their differences and they continue to play shows to this day, but ultimately what does Fishbone represent? You won’t find the answer to that by watching this—that’s for sure. While the title Everyday Sunshine is intended to mirror the name of one of their songs, there is absolutely no sunshine in this documentary.

When Fishbone first emerged from California, no other band sounded or looked like them, and the weight of their innovative and iconic presence is still being felt decades later.  Coinciding with the group’s 25th anniversary, filmmakers Lev Anderson & Chris Metzler have directed this compelling new documentary narrated by Laurence Fishburne. 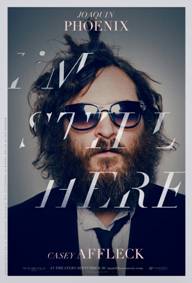 The directorial debut of Oscar-nominated actor Casey Affleck, I’M STILL HERE is a striking portrayal of a tumultuous year in the life of internationally acclaimed actor Joaquin Phoenix. With remarkable access, I’M STILL HERE follows the Oscar-nominee as he announces his retirement from a successful film career in the fall of 2008 and sets off to reinvent himself as a hip hop musician. Sometimes funny, sometimes shocking, and always riveting, the film is a portrait of an artist at a crossroads. Defying expectations, it deftly explores notions of courage and creative reinvention, as well as the ramifications of a life spent in the public eye.