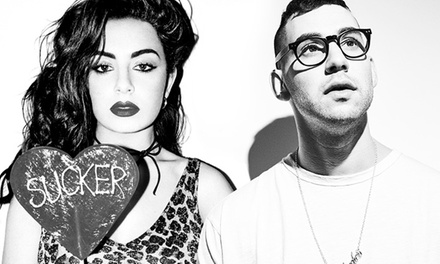 Charli XCX just released the music video for her new single, “Doing It” featuring Rita Ora. You can’t deny that Charli knows how to do a collab right. The video was filmed in a California desert and drew inspiration from: Thelma & Louise, Natural Born Killers, 70s fashion, and Barbie. The video is crazy, weird and cool—basically everything you have come to expect from Charli. C’mon, it’s not every day you see a pink monster truck.

Charli XCX is bringing hit after hit! After working with Icona Pop and Iggy Azalea she released the addicting track, “Boom Clap” and now she has dropped a new video for her latest single, “Break the Rules”. The video features cameos from Rose McGowan and Chloe Chaidez (Kitten). Her sophomore album, “Sucker” is out on October 21st via Neon Gold/Atlantic Records.

I was inspired by movies like” Jawbreaker” and “Carrie” for the “Break the Rules” video. I never went to prom when I was at school so this was kind of me living out my weird fantasy of what prom would be like in my head. I asked Rose McGowan to be in the video and I never ever thought she would say yes, but she did… so she came to prom too… And she trashed it 😉 – Charli XCX