After patiently waiting for months and months and then some more months, Lawson finally announced a few North American tour dates at the end of 2012. It should come as no surprise seeing as how we are having another “British Invasion” in the states and fan girls are jumping in on the frenzy in droves. Don’t believe me? Well, even though most people in America have no idea who Lawson is they still managed to sell out their two dates here. You know, the dates in LA and NYC. Pretty impressive. 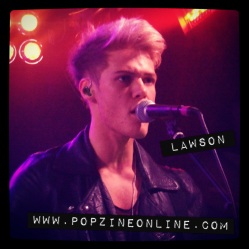 The line at the Troubadour wrapped well around the corner of the venue and then some. Many dedicated fans camped out since the early hours of the morning just to get a good spot in line. Once inside, we were all treated to the opening act, Taylor Matthews and his band. They were an energetic bunch. He was actually on America’s Got Talent, not sure how far he got on the show, but the crowd was feeling it.

Then it was time for Lawson to take the stage. You could actually see the guys coming down the side of the stage and that just got the screaming going. The moment that Andy, Adam, Joel and Ryan all took their spots on stage it was mayhem in the audience. Girls were screaming at the top of their lungs, everyone was being pushed forward and they all had that look in their eye like they couldn’t believe what they were experiencing at that moment.

What about the guys, you ask? They were L-O-V-I-N-G it. It was completely written all over their smiles. They rocked out to their songs, kept engaged with the fans and by the end of the night confessed how the crowd just made some of their dreams come true by singing their lyrics back to them. The entire show was intense and really solidified that Lawson is the band to watch out for. If you think watching their music videos online is good then you better hold on at their live show. 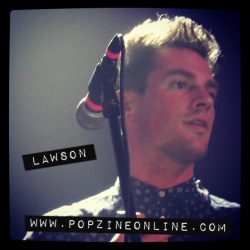 Their set list included (not all in the exact order): “Learn to Love Again”, “Stolen”, “Gone”, “Everywhere You Go”, “Waterfall”, “The a-Team (Ed Sheeran cover)”, “Die For You”, “Hometown Glory” (Adele cover), “When She Was Mine”, “Taking Over Me” with “Call Me Maybe (Carly Rae Jepsen cover)” and “Teenage Dream (Katy Perry cover)” mashed up in between, “Make It Happen”, and “Standing in the Dark”.

We also got to interview the guys earlier in the day, so check that out here.