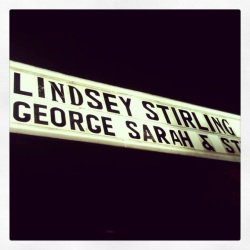 Lindsey Stirling has taken over YouTube with over 41 million views on her most popular song, “Crystallize” and has sold over 300,000 songs with many of them reaching the iTunes Top 100 chart. That’s epic especially for someone who only made it to the quarter finals of the 5th Season of America’s Got Talent.

The show at The Roxy was sold out and they had to add more dates. I’m a regular at The Roxy and I have never seen it as packed as this show was, sold-out or not. Not just that, but looking around you couldn’t even point out her target demographic—you name it and they were there. I missed the first act and only caught the end of the second act, so I was just in time for Lindsey.

From the moment she got on stage she didn’t stop moving around. While I get that’s her thing, I just couldn’t believe it until I saw it in 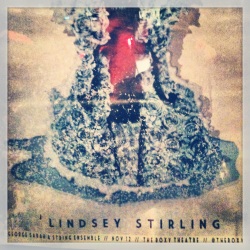 person. She dances all the way through while playing the violin. It’s super crazy and so much fun to watch, but the best part is listening to some phenomenal violin playing. Her compositions and new arrangements for covers are sensational. Her style truly is incomparable and that’s what makes her really special. Her devoted fans know that and many of them traveled from far cities and even some from other states just to catch this show.

I was glad I was able to witness Lindsey play and to hear all of the songs that I have had on replay for weeks. She really is a sight to see and I can’t remember the last time I was so entranced by someone’s music. I’m not sure how often she tours, but if you get a chance to see her show—take it, she won’t let you down.