I attended this event in 2010 when they were still giving out the MTV VMA for LA’s Best Breakout Artist. From what I can tell they are no longer doing that. This year’s event was strictly a concert with some great acts.

The first artist to take the stage was Tori Kelly. I had never heard of her before this, but I’m sure we’ll be seeing a lot more from her. The cool thing about her set was it was just her and her guitar. Not a whole lot of artists do that, mostly because most of them can’t pull it off, but that’s what Tori does. Some of the songs she performed included: “All In My Head”, “Stained”, “Eyelashes”, “Dear No One” and “Thinking Bout You” (Frank Ocean cover). 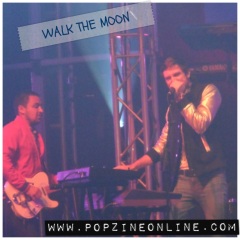 Next up was Ohio band, Walk The Moon. I love indie rock bands and I’m always waiting to find a new one that does something different than the others and these guys are it. Aside from their songs being upbeat, catchy and intoxicating, their energy was off the charts. To see a band so full of life and performing with smiles on their faces really just gets you into it even more. When they announced they were bringing a guest to play onstage with them, no one thought anything of it. That is until John Mayer took the stage and they performed David Bowie’s “Let’s Dance” and everyone was freaking out. They of course played fan favorites, “Anna Sun” and “Tightrope” and by the end of their set I’d say everyone passed walking and were over the moon.

Last and definitely not least was The Wanted. I’ve seen these guys live almost too many times to count and the best part about it is it’s always a fun show. You never leave disappointed and if anything each time gets better and this time was no exception. They came out singing “Invincible” and really got the crowd going. They continued with “Lose My Mind”, “Lightning”, “Gold Forever”, their Coldplay Medley, and “Warzone”.

Then out of nowhere they said they had a guest they wanted to bring out on stage to perform. So they brought a guy they introduced as Psy. I had never heard of him before this, but I will never forget him now. Psy is from Korea and is huge in his home country and he’s looking to do the same in the states. He performed his hit, “Gangnam Style” that is accompanied by a dance that has become viral on YouTube. The guys from The Wanted acted as his backup dancers and just really went all out with it. It was hilarious, it was random, it was unforgettable and you can watch it all here. It also happened to be the birthday of Max and so after that performance, Psy and the rest of the guys presented him with a cake that ended up on his face while the audience sang ‘Happy Birthday’ to him. They continued with “Chasing The Sun”, “All Time Low” and concluded with their breakout hit, “Glad You Came”.

This year the MTV2 VMA Pre-Party had top notch performances, included random yet great guest appearances, free Taco Bell, and was overall and entertaining night out that had everyone going home with at least one new favorite artist.